Lower East Side Printshop is pleased to present Space Coiled Like A Serpent with guest curator David Crane. The exhibition will be on view on the Printshop’s website from December 8, 2021 – February 4, 2022.

Inside the void his metrics predicted, the fundamental parameters of the universe switched properties: space flowed like time, time stretched out like space … If he could reach the center of the abyss without gravity tearing him apart, he would distinguish two superimposed images projected at once in a small circle over his head, like those visible through a kaleidoscope: in one, he would perceive the entire future evolution of the universe at an inconceivable pace, in the other, the past frozen in a single instant.

—Benjamín Labatut, When We Cease to Understand the World

In his recent novel When We Cease to Understand the World, Benjamín Labatut reflects on the life and work of German physicist and astronomer Karl Schwarzschild (1873-1916). While serving in the German army in the First World War, Schwarzschild provided the first exact solution to Einstein’s equations of general relativity. In doing so, Schwarzschild outlined for the first time the phenomena we now know as black holes, spaces of such density that not even light can escape the force of their gravity. These singularities are spaces in which the governing rules of the universe no longer apply, suggesting sites beyond the borders of our perception in which opposites and contradictions would not be cancelled out but co-exist simultaneously, where disparate temporalities and modes of being could converge, where space itself could coil like a serpent or be crumpled like a piece of paper. 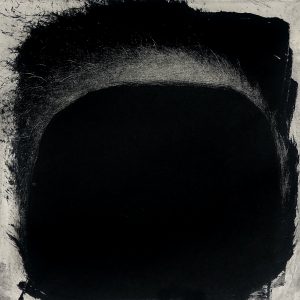 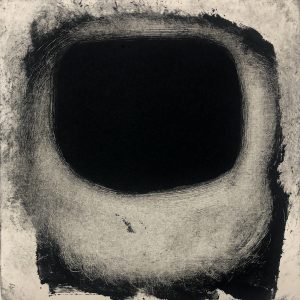 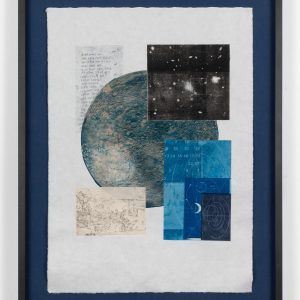 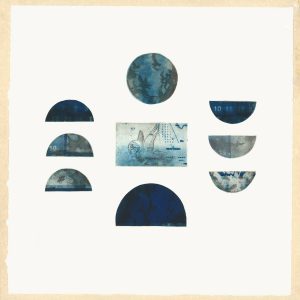 The seven artists in this presentation explore, in various ways, the boundaries and border-spaces where polarities— political or material, personal or cultural—intersect and recombine. The rich, dense blacks of Douglas Collins’s etchings exert a gravitational pull, enlivened by the dynamism of the intense scouring at their limits. The stark central forms flicker between the bare fact of flatness and a suggestion of infinite depth. Through a layered use of imagery and the employment of a variety of techniques, including photolithography, intaglio, and cyanotype, Kate Liebman transmutes material both art-historical and astronomical into personal ruminations on time, grief, and remembrance. Liebman’s work Icarus III elegantly reflects on the limits against which humanity is constantly, and often futilely, straining: the limits of ambition and pride, as in the reproduced drawing of Bruegel’s The Fall of Icarus; and the limits of perception, illustrated by the photograph of Icarus, the most distant recorded star. 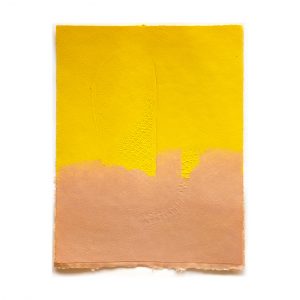 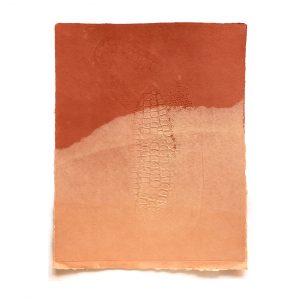 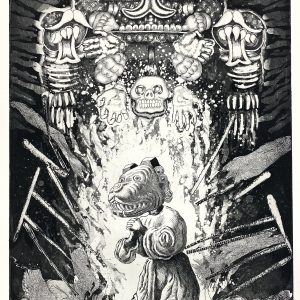 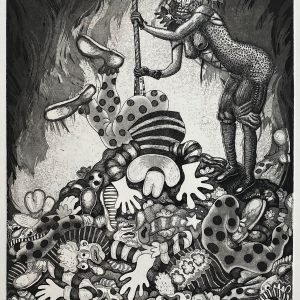 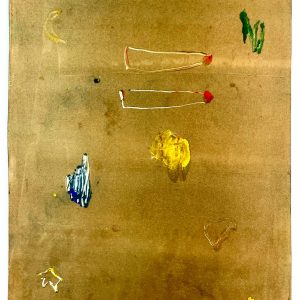 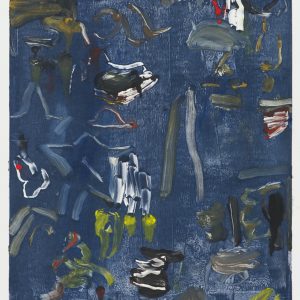 Alva Mooses’s works of handmade paper investigate the geologies of colonized landscapes, particularly that of the US/Mexico border. With ghostly imprints that resemble the soles of shoes and ears of corn, these works bear witness both to fleeting presences and the potential of communion. Also concerned with the space of the border, Ernesto Ortiz Leyva’s surreal scenes construct cross-cultural and trans-historical narratives to chronicle a legacy of violence. Combining intricately etched cross-hatching reminiscent of Old Master prints with bold, Pop-inflected forms, Leyva satirizes masculine aggression and notions of racial purity while displaying the dynamism of cultural hybridity. In abstract, painterly monoprints, B Chehayeb explores the interstitial spaces and unpredictable synapses of dreams and memory. Concerned not with facticity but with sense and suggestion, her works map both the bridges and the chasms between cultures, between languages, and between the past and the present. 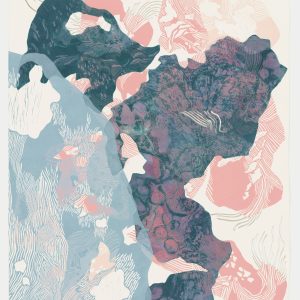 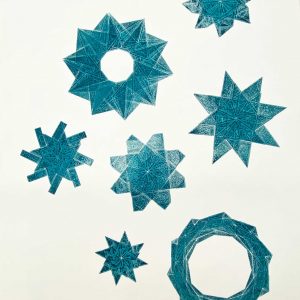 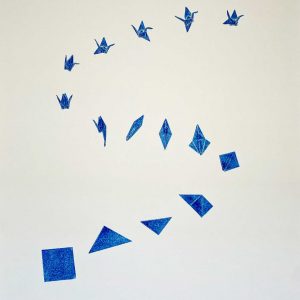 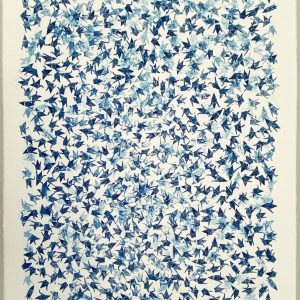 Caroline Ongpin, in Transient Beings II, employs linocut, etching, and paper cutting in an intuitive process to create imagined topographies. Open to chance, the composition proposes not a fixed cartography but a terrain in flux, permeable and open to new combinations and intersections. Sok Song’s prints trace the process of the traditional art of origami. With careful attention to every stage of the metamorphosis, these works demonstrate that each fold is a hinge-point, an intersection, a convergence, wherein transformation can occur.

David Crane is an independent writer and curator based in New York. He most recently served as Curatorial Fellow at the Whitney Museum of American Art, where he managed the museum’s Sondra Gilman Study Center for works on paper. There, he curated the exhibition Order and Ornament: Roy Lichtenstein’s Entablatures. Crane has also organized the group exhibitions Life Serial at the Wallach Art Gallery at Columbia University and Comic Future at the Wexner Center for the Arts, and previously served as a member of the Research & Exhibitions Department at David Zwirner. His writing has appeared in publications produced by the Wallach Art Gallery and the Wexner Center, and will feature in a forthcoming exhibition catalogue published by the Whitney. With an interdisciplinary background in art history, cinema studies, and literature, he has received an MA from Columbia University, an MA from the University of Chicago, and a BA from Amherst College.

We thank our volunteers, friends, members, and patrons for their dedication, support, and generosity.